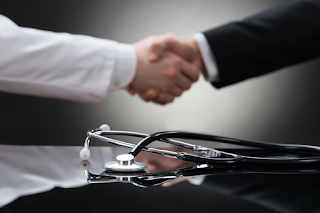 “April was the second-most active month of the year, behind March,” Robert Aprill, of Provident Healthcare Partners LLC, Boston, told Bloomberg Law. This “indicates that major market players are increasing their acquisition presence.” Some big industry names were among that group, including Mednax Inc., Humana Inc., and AMN Healthcare Services, all of which closed two deals, he said. Private equity groups, such as Welsh, Carson, Anderson & Stowe and Chicago Pacific Founders also were active in April, he said. 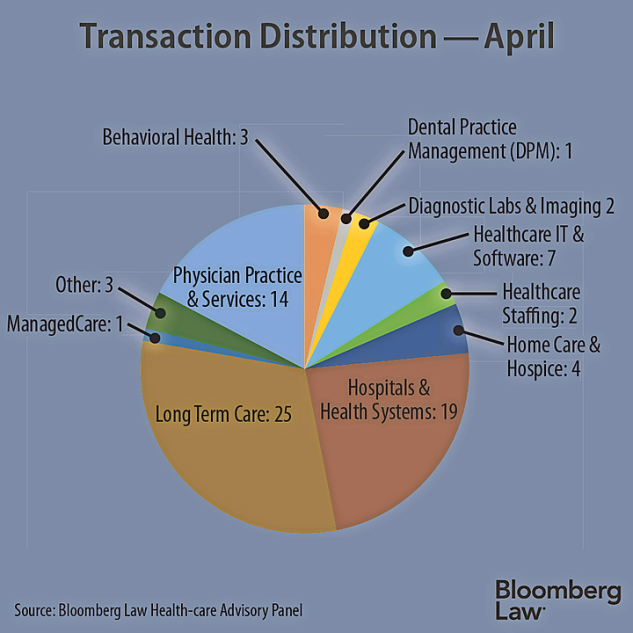 A curated list of select transactions compiled for Bloomberg Law by investment bankers who advise industry players on consolidations, mergers, and acquisitions reveals the health-care deal market still is going strong after multiple years of growth. Any fears that new administration policies would suppress opportunities in the industry surely have been put to rest, given the demonstrated continued growth in 2018 to date.

A few new industry trends are emerging, even as old ones still are going strong. Gary W. Herschman, of Epstein, Becker & Green in Newark, N.J., told Bloomberg Law there is a “budding trend of major health-care industry players seeking to dominate multiple sectors throughout the outpatient health-care continuum.” These players, through this consolidation, will be able to “better coordinate and control the quality and cost effectiveness of health-care services to patients,” he said.

Herschman cited, as an example, Humana’s investment in Curo Health Services, a home-care and hospice services provider with multiple locations in 22 states. The deal gives Humana, a health insurance giant that operates a primary-care physician practice network, a 40 percent stake in the provider.

“Telehealth, retail clinics, and physician practices allow” expansion along the outpatient continuum “to happen on the ‘front end’ of illnesses and treatments,” Herschman said, “but home health services are key to managing care following surgery and hospital stays.” Other big health-care companies focusing on outpatient services may make similar strategic acquisitions in the future, he said.

Consolidation in the addiction treatment sector is an emerging trend, Paul D. Gilbert, a member of Epstein, Becker & Green in Nashville, Tenn., told Bloomberg Law. Though movement in the sector already has started, it still is “on the front end.” Gilbert attributes this, in part, to the sector’s “extraordinarily fragmented state.” He expects the “‘best in class’ providers to consolidate and scale relatively quickly to meet the overwhelming need for effective and lasting addiction treatments,” once the “leading providers develop and prove the long-term efficiency of addiction treatment protocols.”


“The physician sector remains hot,” Herschman said. “More and more groups are considering their strategic options in the rapidly changing environment,” he said. This includes assessing what moves will improve their “ability to survive and compete in the future.” There are four top transaction options being considered by physician groups, Herschman said. They are: 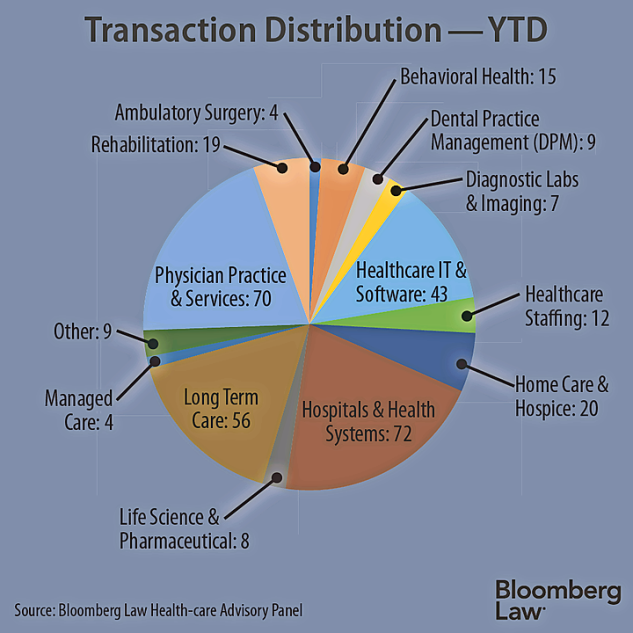 Other significant transactions reflecting this trend, according to Herschman, include: St. David’s Hospital’s purchase of Austin Diagnostic Clinic and its 150-plus physicians in Texas; purchases by national companies, like Optum’s purchase of Massachusetts mega-group Reliant Medical Group, Humana’s purchase of Family Physicians Group in Florida, and Mednax’s deal with Florida’s Women’s Radiology Associates; and private equity investments, like Welsh, Carson, Anderson and Stowe’s investment in Charlotte Radiology.

No physician practice sector “has experienced more chatter than urology,” Aprill added. There were several transactions on the list that involved urology, and the Delaware Valley Urology-New Jersey Urology deal creates “one of the largest independent providers of urological services in the country,” he said.

The urology space “has been ripe for ongoing consolidation,” since it experienced its first private equity deal in 2018, Aprill said. “All signs point towards an active urology space through the remainder of 2018,” he said.

m of care that results from these transactions could largely define the manner in which care is provided going forward,” though the “best outcomes will be seen only after the systems are fully integrated,” Gilbert said.

Overall, April’s hospital and health system transactions “are indicative of the intense pressure and responsibility felt by providers and payers to significantly improve health-care outcomes, reduce expenses and costs, provide care in the least restrictive and most appropriate settings, and enhance the ability of patients, family members, and health-care professionals to work together to achieve better health and outcomes,” he said.

Deal activity in the hospital and health-system sector increased 46 percent over April 2017, Hector M. Torres, of ECG Management Consultants, Chicago, told Bloomberg Law. It represented almost 25 percent of April’s total deal activity, although the pace of transactions in this sector “slowed down modestly compared to the robust activity observed in” March, he added.

The Massachusetts deal “initially faced opposition due to regulatory concerns that the cost of care would increase dramatically for consumers within the region,” Torres and his ECG colleague, Aaron T. Newman, said. State regulators’ conditional approval of the acquisition highlights “the importance of a comprehensive regulatory approval strategy when undertaking hospital and health system acquisitions,” they said. Partners faced similar regulatory scrutiny in connection with its failed attempts to acquire South Shore Hospital in Weymouth, Mass., and Hallmark Health System in Medford, Mass., they noted.

The Piedmont-Clearview deal was Piedmont’s third acquisition within the past 12 months, Torres said. “Although slightly smaller in size” than Piedmont’s other acquisitions, “Clearview’s 77-bed acute care hospital strategically expands Piedmont’s presence within the highly competitive Atlanta, Ga., market,” he said.

WellStar Health, Georgia’s largest not-for-profit health system, also has been actively acquiring hospital assets, “as evidenced by its purchase of five Atlanta-area hospitals from Tenet Healthcare in 2016,” Torres said. Both Piedmont and WellStar, as a result of pursuing a comprehensive regional mergers and acquisitions strategy, “have increased their net patient service reviews by 36 percent and 70 percent, respectively,” he said. “This demonstrates the power and impact of growth and scale via mergers and acquisitions activity.”
Posted by David Lopez at 3:08 PM